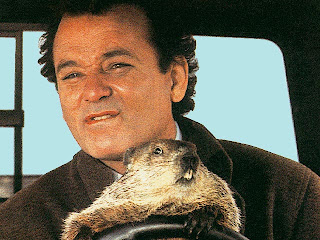 In the classic comedy movie, Groundhog Day, Bill Murray is trapped in a time loop, living the 2nd of February over & over again, stuck in what he viewed as a living hell, the same tedious events playing out again & again. We Toronto FC fans can certainly relate.

Since the the past weekend, Reds supporters have dealt with a succession of dismal days of negativity surrounding the team. Saturday saw TFC put in a dire performance against the beasts of the east, Sporting Kansas City, then the ensuing fallout from the game on Sunday. Then things went from bad to worse, with news that Miguel Aceval, Luis Silva & Nick Soolsma were all arrested for public intoxication & subsequently sent home by the club for their actions. This meant we had to put up with the embarrassment this brought to the club, & the sad realization Toronto FC has become the laughingstock of all of Major League Soccer. Today, as if having to deal with an impending match tonight against Houston in their brand spanking news stadium, which has quickly turned into a fortress, words has come out, courtesy of the ever reliable MLS Rumors that fan fave Joao Plata, may soon be heading back to Ecuador. Not much of a stretch to assume that this promising young talent is fed up with the shit show at the club.

One cannot help but wonder what lies ahead in the coming days. While I & most other Reds fans are ever optimistic (what other choice do we have?),  it's a reasonable bet to make that we will when we wake up tomorrow morning, it will be to the aftermath of yet another TFC defeat. The Dynamo are a solid team & should dispose of the Reds with comfort, 2-0 is my prediction for the record. We will once again wondering what we can do to change things.

This is where our experience deviates from that of Murray's character, Phil Connors. In the move, Connors comes to the realization of his situation, courtesy of his love interest Rita. Instead of seeing this as punishment, Phil comes around to accepting his circumstance as an opportunity for self-improvement & he makes the most of it, with the requisite Hollywood happy ending. As much as we TFC supporters make want to better our plight, we have little power to affect things. that ultimately lies with MLSE, & the man who oversees the club, one Tom Anselmi.

So long as that incompetant dolt is still pulling the strings, or perhaps more accurately not giving a rat's hairy ass about TFC, the club will remain adrift & fans quite despondent. I don't know about any of you, but I think i'm gonna hit the snooze button tomorrow morning.
Posted by McGuire at 8:46 p.m.